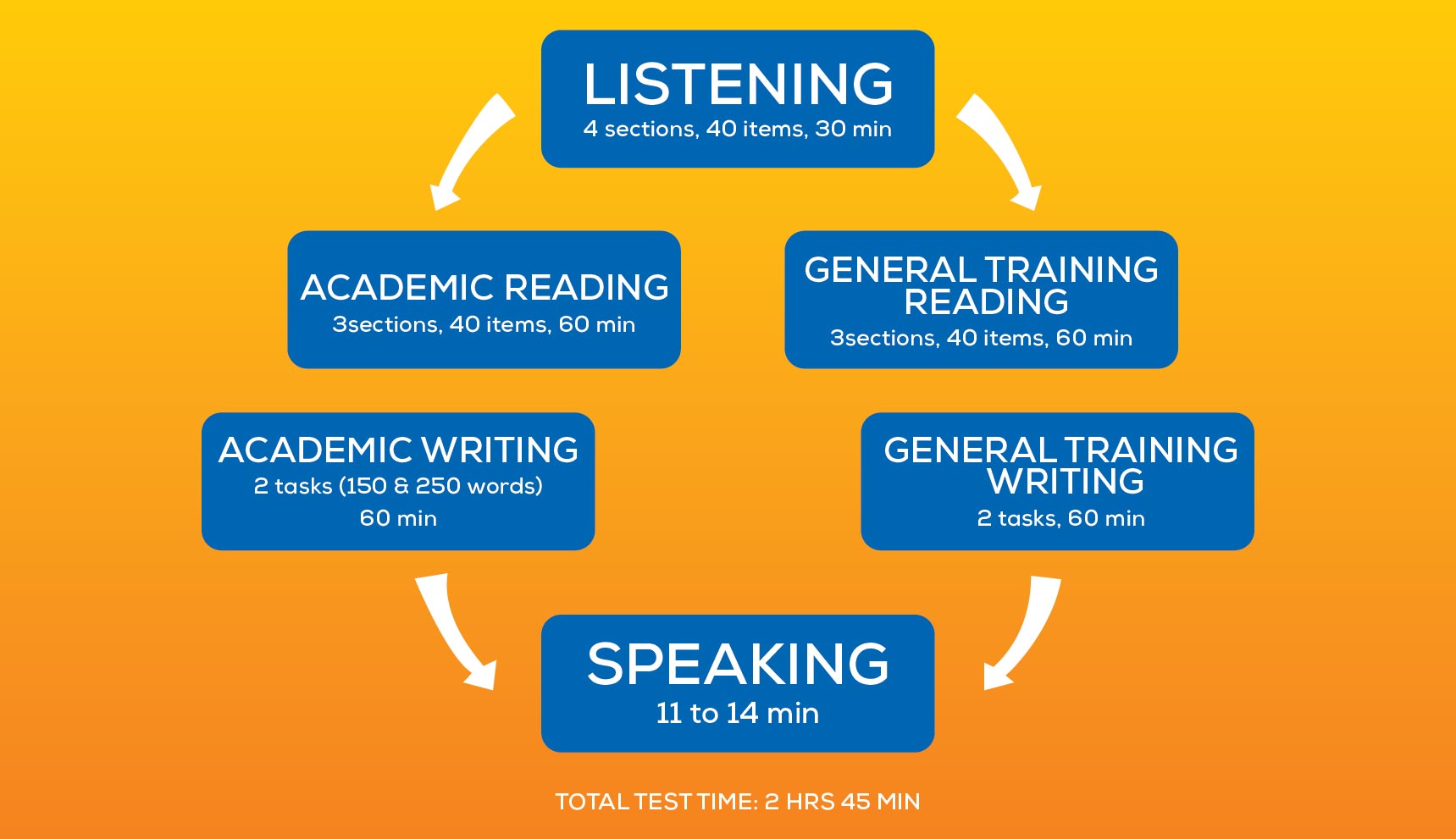 IELTS, the international English Language Testing System, is one of the popular English language Proficiency test which assesses the ability in the language. IELTS is managed jointly by the British Council, Cambridge ESOL and IDP Australia, and is usually taken by non-native speakers who plan to study, migrate or work abroad. Accepted and recognized by more than 10,000 organizations worldwide which includes educational institutions, employers, professional associations and government, it has more than three million tests takers in a year. IELTS assesses English skills in four sections mainly Listening, Reading, Writing and Speaking.

Basically, there are two formats of IELTS: Academic and General Training. Academic IELTS is for students pursuing higher education overseas while General Training is for the candidates seeking immigration or work in UK, Australia and Canada.

In addition, IELTS for UK Visas and Immigration (UKVI) Academic or General Training or the IELTS for Life Skills Test are the IELTS test that support UK Visa application to work, live or study in the UK.

Listening section contains four recorded texts – monologues and conversations by a range of native speakers. As suggested by its name, the answers to series of questions are to be identified from the audio. The questions test the ability to understand main ideas, detailed factual information, opinions and attitudes of the speakers. They also test the ability to understand the purpose of what is said and to follow the development of ideas.

Each section can be heard only once and a variety of voices and native-speaker accents is used during the test.

A conversation between two people set in an everyday social context, such as a conversation in an accommodation agency.

A monologue set in an everyday social context, like a speech about local facilities.

A conversation between up to four people set in an educational or training context, such as a university tutor and a student discussing an assignment.

A monologue on an academic subject, like a university lecture.

Reading component comprises of 40 questions that test a wide range of reading skills including reading for gist, main ideas, detail, skimming, understanding logical argument and recognizing writers’ opinions, attitudes and purpose. There is slight variation in Academic and General Training version of reading.

This version includes three long texts, which range from the descriptive and factual to the discursive and analytical. The texts are authentic and are taken from books, journals, magazines and newspapers.

This version consists extracts from books, magazines, newspapers, notices, advertisements, company handbooks and guidelines. These are materials one is likely to encounter on a daily basis in an English-speaking environment.

Writing section consists of two tasks in both the version of IELTS; however, there is variation in the type of question between the two:

This version includes writing tasks of general interest and that is suitable for individual entering undergraduate or postgraduate studies or seeking professional registration. The responses must be written in a formal style.

It entails the description, summarization or explanation of the provided graph, table, chart or diagram. You may be asked to describe and explain data, explain the stages of a process, how something works or describe an object or event.

It includes writing an essay in response to a point of view, argument or problem.

The Writing component of the General Training version includes two tasks, which are based on topics of general interest.

It includes writing a letter to a presented situation requesting information or explaining the situation. The letter may be personal, semi-formal or formal in style.

It includes writing an essay in response to a point of view, argument or problem. The essay can be slightly more personal in style than the Academic Writing Task 2 essay.

The Speaking component assesses the use of spoken English. It is same for both Academic and General Training versions, just like the Listening component.

It requires answering general questions about oneself and a range of familiar topics, such as home, family, work, studies and interests. This part lasts between four to five minutes.

A card that asks to talk about a particular topic will be provided. A minute is given to prepare before speaking for up to two minutes. The examiner then asks one or two questions on the same topic to finish this part of the test.

The further questions connected to the topic in Part 2 is asked in this portion. These questions give an opportunity to discuss more abstract issues and ideas. It lasts between four to five minutes. 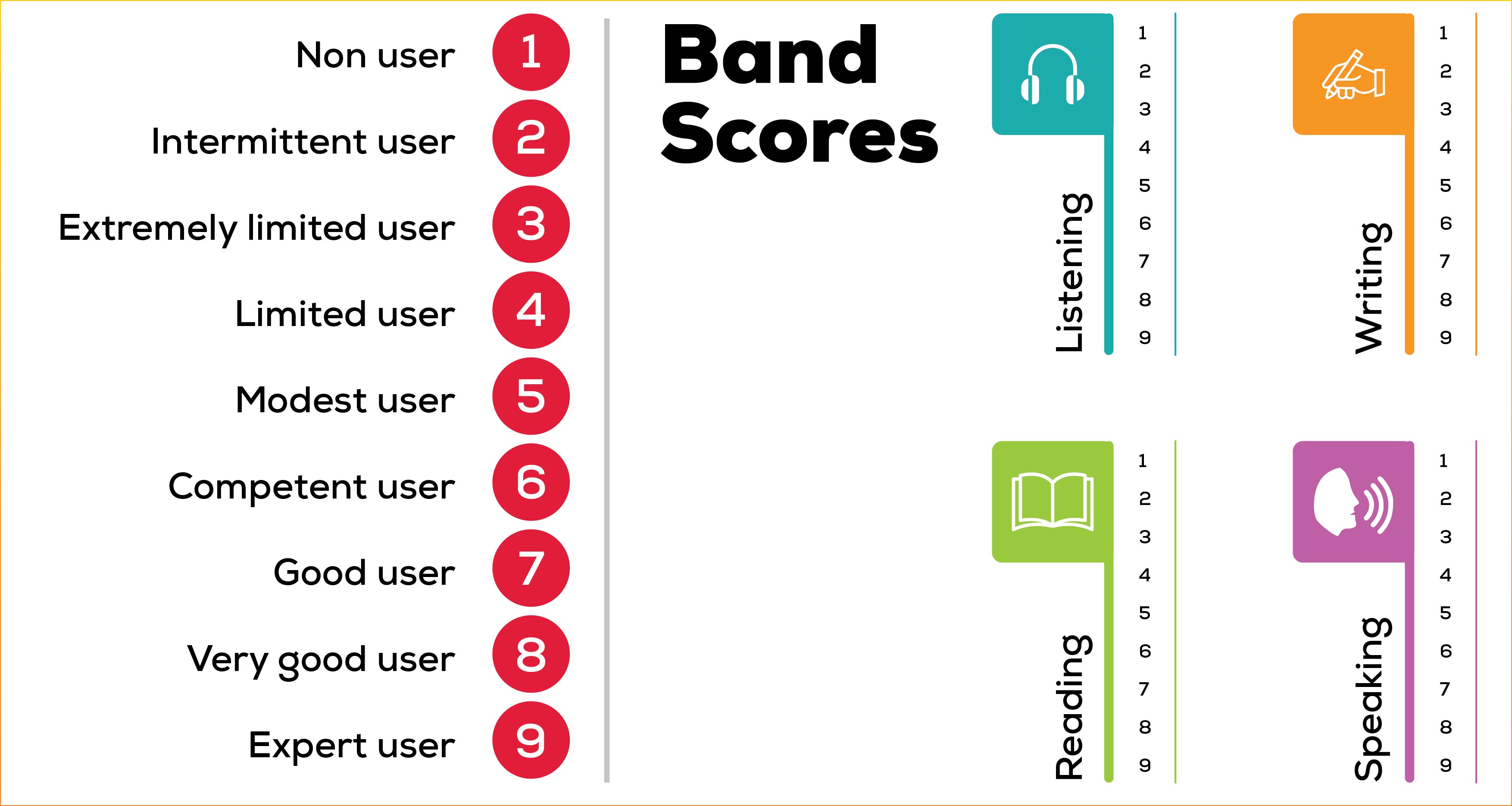 IELTS scores can range from 0 to 9 where 0 signifies Non user while 9 is for an Expert User. An score of 6 and 6.5 is the most acceptable by the providers in Undergraduate and Postgraduate level in different countries around the world.

The overall band score is the average of four component scores rounded to the nearest whole or half band. You can always calculate your band score.